The weevil is a beetle of the Dryophthoridae family (formerly Curculionidae), native to Southeast Asia and Polynesia, that has continuously spread to other temperate climate zones. In 1995, it appeared for the first time in Spain, in the provinces of Granada and Malaga; later, in 2004, it was detected in the Valencian Community. However, it was in 2005 when the pest spread significantly, as it was detected in the three Valencian provinces and for the first time in Catalonia, specifically in the municipality of El Vendrell (Baix Penedés). It is currently spread all over the Iberian peninsula, from the Mediterranean coast to the Atlantic, even in inland autonomous communities like Aragon or Extremadura. It is also present in the Balearic Islands, while in the Canary Islands it is in the process of eradication.

The adult measures from 2 to 5 cm, it is reddish-brown and has a very characteristic long beak; the male is distinguished (Fig. a) from the female (Fig. b) by a small crest of hairs, like a fringe, which it has on its beak.

The eggs are oval shaped and bright white. Females lay 300 to 400 eggs in the tender tissue at the base of the crown leaves and in the wounds of the stipe.
The larvae (Fig. c) develop inside the palm tree and can exceed 5 cm in length at the end of their development. They are apodous, pear-shaped, and yellowish. They have a bright dark brown cephalic capsule with strong jaws.

The pupa (Fig. d) is also yellowish and is protected by a 4-6 cm cylindrical cocoon (Fig. e), made by the larva with fibres it takes from the palm tree.

The complete cycle, from egg to adult, lasts 4-6 months. Adults do not usually leave the palm until it is completely destroyed. They can have several generations inside the same palm tree, where all the phases of the insect live in a gregarious way, carrying out a minimum of 2 generations a year. When adults leave the palm tree, they fly to colonise others; they can fly more than 5 kilometres in one day. However, they do not fly when temperatures are lower than 16ºC, approximately. Initially, it preferred the Canary Island palm (Phoenix canariensis), especially male specimens. Nowadays, although it still more inclined towards Canary Island palms, it is found both in date palms (Phoenix dactylifera) and in Washingtonias (especially in Washingtonia filifera). However, it has also been found in Butia (Butia capitata), Mediterranean dwarf palm (Chamareops humilis) and windmill palm (Trachycarpus fortunei). 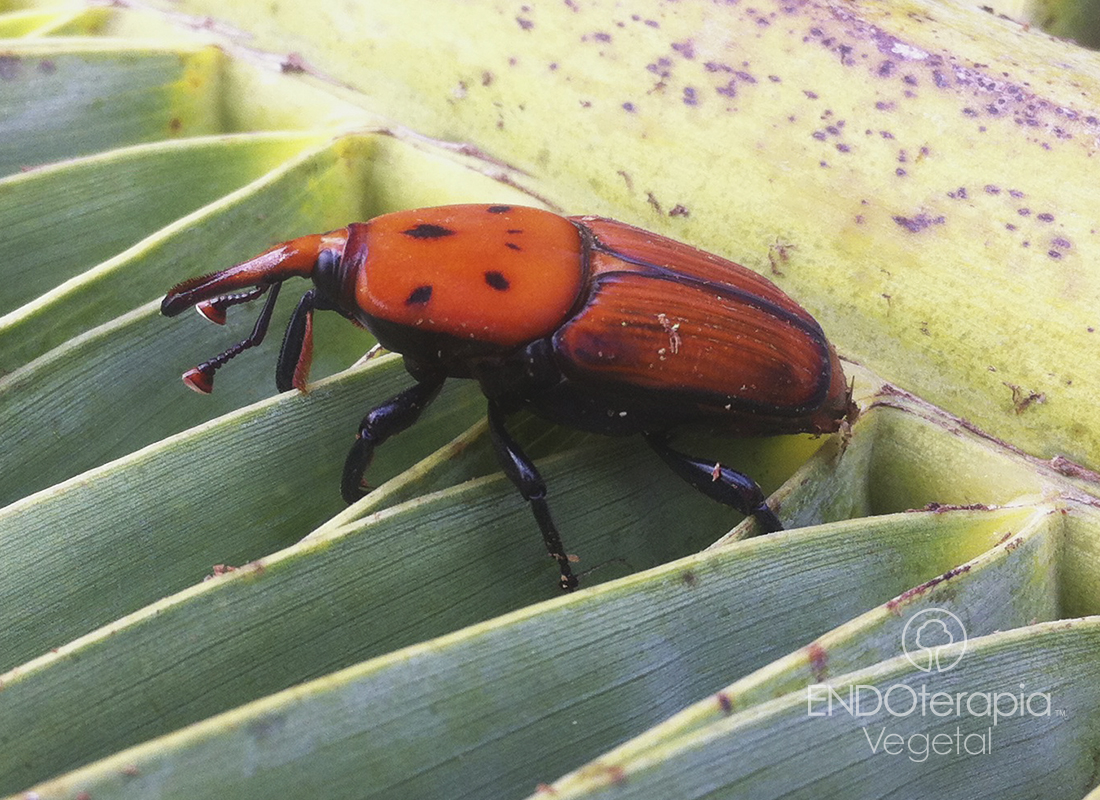 Fig. e – Adult coming out of the cocoon.
It is very difficult to detect the presence of the pests in its initial attacks. The earliest and most evident symptoms that can be observed in affected palms are in the youngest and central leaves.

It all starts with small bites and small leaflet clippings, but progresses to crown asymmetry, leaf decay and collapse of the core of the palm (Fig. f, Fig. g and Fig. h). The affected leaves can be easily pulled off and at their insertion point we can see the excavated galleries (Fig. i) and the presence of cocoons. Subsequently, the entire crown of the palm tree is affected, all fronds collapse and the plant dies (Fig. j).

In both date palms and Washingtonia , it is very common for the stipe to be affected; exudations can be observed in the holes used to lay the eggs. These attacks pose a great danger as they greatly compromise the stability of the palm tree and can cause it to break and fall. Fig. h – To the left of the image we can see a specimen of female Phoenix canariensis with clear symptoms of being attacked by red stripe weevil. Next to it, we can see two specimens already dead. Fig. i – Galleries excavated at the base of a frond. Fig. j – A specimen of Phoenix canariensis killed by red stripe weevil.
It is a pest that requires a very strict treatment protocol due to its great voracity and aggressiveness, and due to the fact that it does not have a well established and defined biological cycle. However, many times the first symptoms are detected in late summer and early autumn, as a consequence of the new infestations that take place in the previous winter and spring.

Preventive treatments using plant endotherapy (ENDOterapia Vegetal®) are recommended- We recommend two annual treatments, the first one in spring and the other one in autumn, in order to have a good coverage throughout the year.

However, curative action can also be taken. The earlier the infestation is detected, the greater the chances of survival for the palm tree. In these cases, sanitary pruning or surgeries are performed (Fig. k). These consist of removing the fronds that come off easily or are at risk of falling, as well as all the plant tissue affected and with symptoms of decomposition. This continues until the apical meristem is found and the viability of the palm tree can be determined according to its condition.
The recovery of the palm tree will be conditioned by how badly the apical meristem is affected and by subsequent meteorological conditions. After surgery, the meristem is left exposed to the elements, so extreme cold or heat can damage it and, therefore, kill the palm tree. Fig. k – View of the apical meristem of a specimen of Phoenix canariensis, which has undergone recovery surgery.