The Cameraria is a miner lepidopteran insect. Adults (Fig. a) are small moths with a 7-8 mm wingspan. The head has a frontal hair tuft and it has long filiform antennae. The anterior wings are reddish-brown, with small white bands; the posterior ones are very narrow and at its end, long hairs stand out forming a fine fringe. When the adult is at rest, its two pairs of wings rest on its back. The greenish-white caterpillars are flattened, measuring 0.5 to 5 mm long, and they through five instars. The eggs are lenticular in shape and translucent, measuring 0.3-0.4 mm. They are almost always laid on or next to the nerves of the leaf adaxis. The chrysalis is reddish-brown and forms inside the mines (galleries) of the leaf.

It is a species that spends the winter in the form of chrysalis. In spring, the adult moths emerge from the leaves fallen during autumn. A few days after conception, the females lay several dozen eggs that can take between 1 and 3 weeks to hatch. Then, the caterpillars are born. They will penetrate into the leaf and will not come out again. 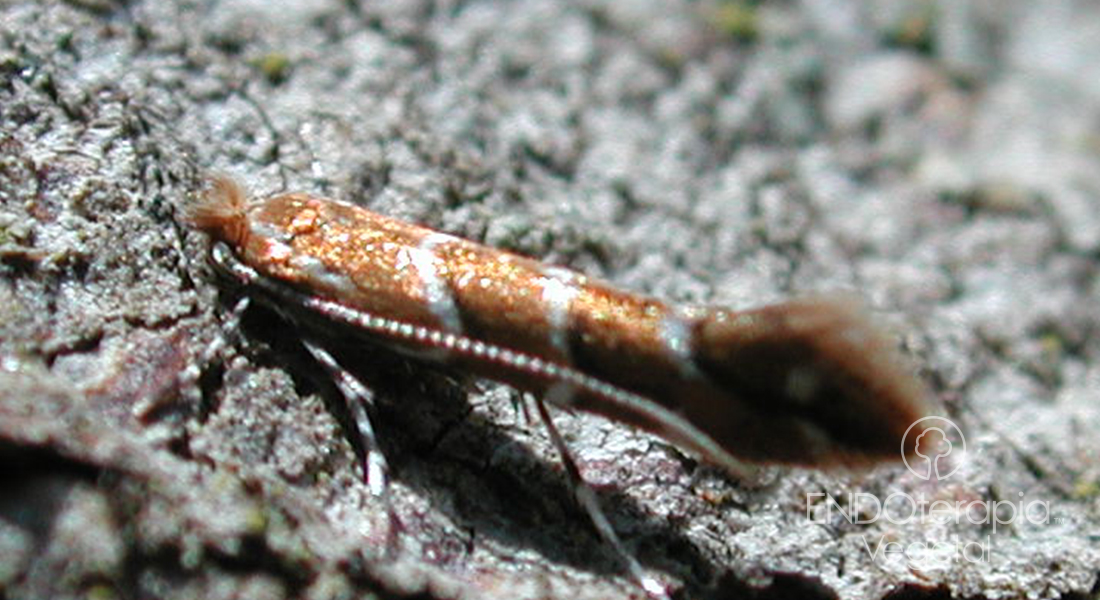 Fig. a – Adult moth.
The caterpillars feed on the upper parenchyma of the leaves, forming irregular galleries or mines (Fig. b) as they crawl. The mine grows larger as the caterpillar grows. The leaves are completely semi-transparent brown and fall prematurely. This reduces the photosynthetic capacity and, consequently, affects the vigour of the tree.

It can sometimes be mistaken with the symptoms of leaf blotch of horse chestnut (Guignardia aesculi), a fungal disease that causes blotches on the leaves (Fig. c); not to be confused, since the mines of Cameraria only appear on the adaxis of the leaves and are protruding.

It can also be confused with blotches caused by physiological pathologies, such as heat stress (Fig. d). This pathology makes the edges of the leaves brown and dry. It is typical of specimens located in areas where summer is very extreme. 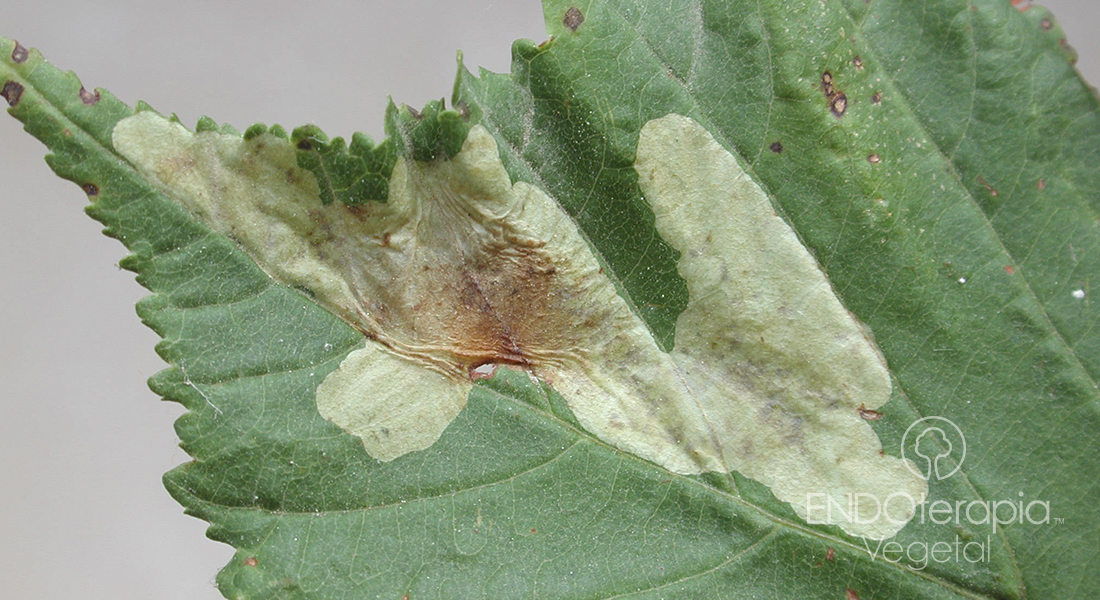 Fig. b – Mine caused by a Cameraria caterpillar. 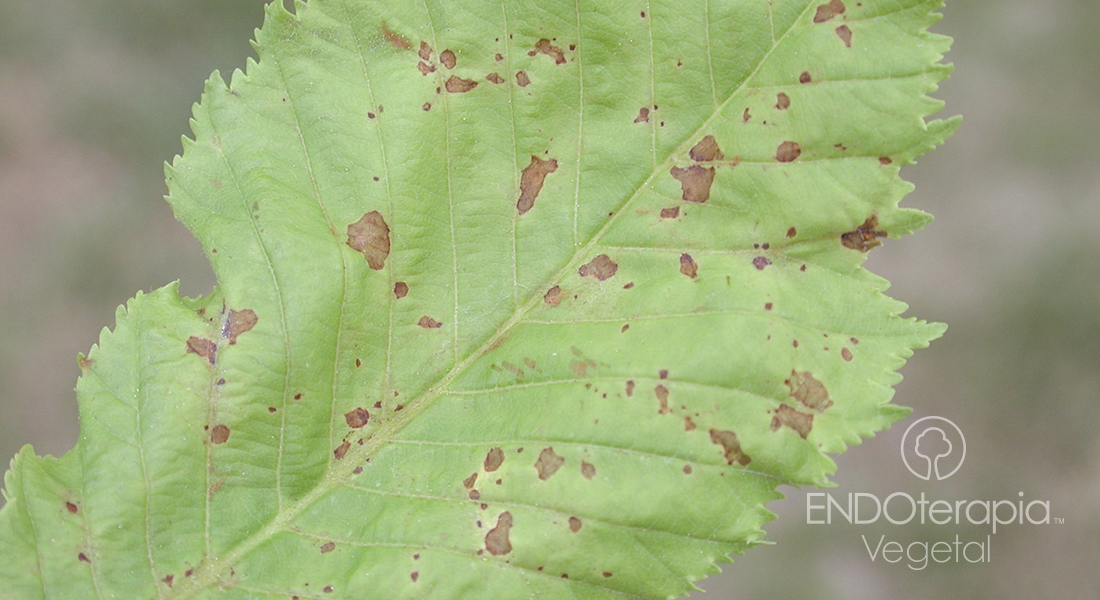 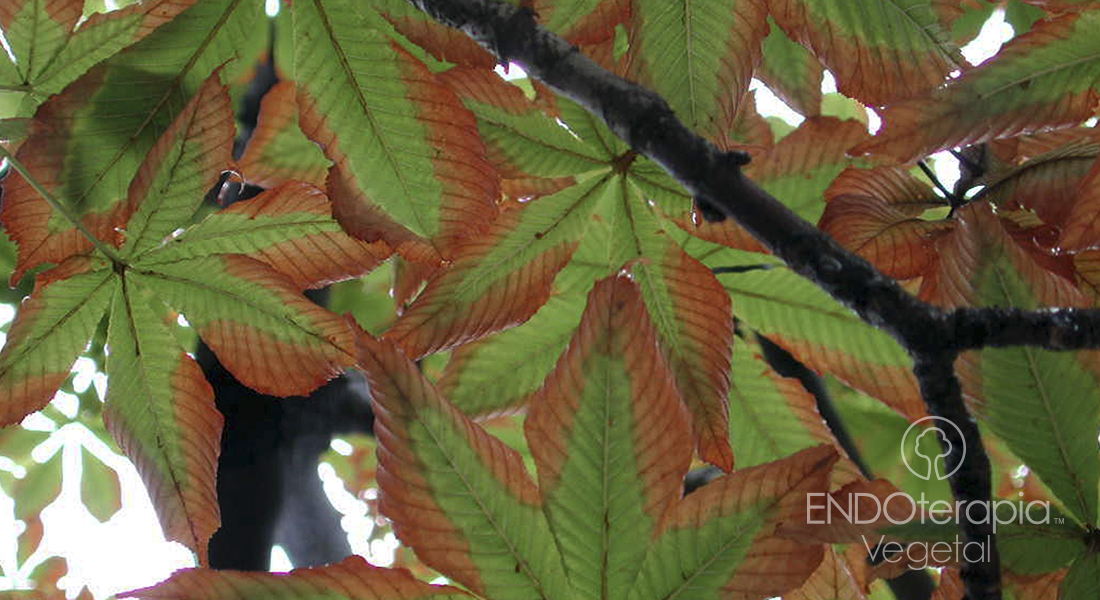 Carry out a treatment with plant endotherapy (ENDOterapia Vegetal®) in a preventive way to avoid the onset of problems; the treatment will be carried out when the first adults appear after coming out of winter diapause.

Mainly Aesculus hippocastanum, although to a lesser extent it can also affect Acer pseudoplatanus and Acer platanoides.